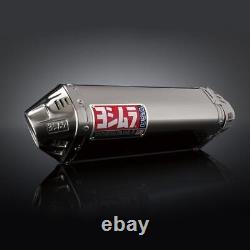 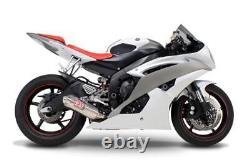 The TRC is a race-proven exhaust featuring a tri-oval design, trick cone-shaped end cap and an easily removable low-volume insert. The TRC has a straight baffle leading to that distinct cone-shaped end cap. The TRC also comes with a laser-etched heel guard that combines style and function. Large volume of packing material. Straight baffle for ample flow. All Street Series systems are Slip-on / Bolt-on applications that do not require tampering with the vehicle's emissions control system, yet still deliver that special spirit the world has come to expect from the legendary company known as Yoshimura.

Street Series applications cover all of the iconic profiles that Yoshimura has become famous for. From the legendary tri-oval profiles to the refined ALPHA mufflers, and even our R-55 angular masterpieces.